How can an 18th century building’s roof insulation, with no refurbishments since construction, compete with modern day insulation? Especially as modern insulation has been scientifically tested against standards and regulations before it even sees a market shelf. Do we know for certain that sandstone construction is any better or worse than modern day materials? This is from a universal point of view – building regulations apply across several archetypes of buildings and follow a standard approach.

The Society for the Protection of Ancient Buildings (SPAB) conducted a study in which initial results suggest “conventional industry practices are struggling to accurately represent the thermal performance of traditionally built walls.”

We all know the outcomes when important factors aren’t accurate and, in this case, an old building that may have value to a larger community than its function prescribes could be knocked down or refurbished due to its thermal efficiency being less and its costs too great to refurbish it to correct standards. So, it gets knocked down in the name of sustainability.

Philip Dunne MP is quoted in a BBC News article saying: “buildings have a significant amount of locked-in carbon, which is wasted each time they get knocked down to be rebuilt, a process which produces yet more emissions.”

This statement generalises the whole story. What matters is the comparison between the embodied carbon of the refurbishment or the demolition – otherwise known as the net loss/gain. Buildings do have a significant amount of locked-in carbon, which is true across different building archetypes. That argument that the resource is wasted when they get knocked down implies that the entire locked-in carbon is wasted, but the BBC News article nor Philip Dunne MP’s quote make reference to any recycling processes that the materials go through – a commonplace practice across the sector.

The article further references another BBC News article that elaborates on the Commons Environmental Audit Committee’s (EAC) report where The Architect’s Journal gave evidence on different emissions related to operations and construction materials. The main reason behind the committee’s appointment is that there are new VAT rules, which can often make it more expensive to refurb a building than rebuild it. The consequence of this is that buildings will be unnecessarily demolished rather than refurbished.

There is further evidence that supports the original findings, which say that demolition must be reduced. Pantini and Rigamonti (2020) focused on selective demolition and maximising the ‘worth’ of existing building materials versus general demolition. Their study found that the results are highly dependent on unique factors. This links back to the SPAB findings, showing that modern techniques could be inaccurate when faced with modern regulations around heat and energy efficiency.

Schwartz, Raslan and Mumovic (2022) show that refurbishment is generally better than rebuilding and their findings back this up. The refurbishments Life Cycle Carbon Footprint (LCCF) ranged from 1,100 and 1,500 kgCO2/m2, whereas the rebuilding LCCF was ranged at 1,220 to 1850 kgCO2/m2. It is important to note that there is significant overlap in those two ranges.

The BBC News article is backed by significant evidence and studies that point to it being a good, sustainably focused path to take going forward, but we cannot ignore unique building factors which is why a generalised approach would not be as effective as one that accounts for various situations.

A building may need to be demolished for safety reasons, or a refurbishment would increase its renewable energy capability. A generalised statement would fail to catch these obviously unique situations, which at the moment considering VAT breaks favouring rebuilding over refurbishment, would have negative consequences for both the environment and local communities.

The Commons Environmental Audit Committee says the government's recent decision to relax planning rules may be leading to an unintended increase in demolition. 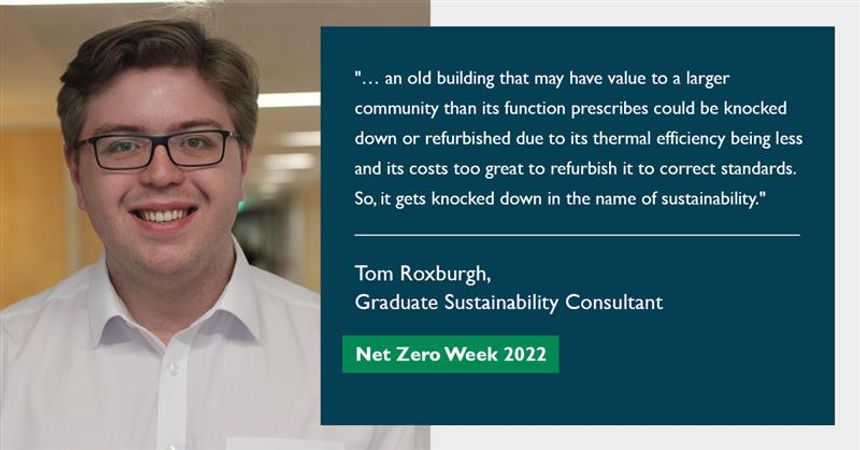