It was back in May that I first wrote about Google's Smart Cities, and the impact they could have on the places where we live and work.

(You can read the article by clicking here)

At the time, the idea was just that; an idea, a concept of something that could happen in the future. It now looks a lot closer to reality than I thought!

Google's subsidary Sidewalk Labs has put in a bid for a 12 acre site in Toronto, Canada, potentially looking to create a connected high-tech district that will attract leading businesses to the city, and act as a testing ground for smart technology and buildings.

It's a risky move. With Sidewalk Labs only two years old, to be moving from concept to reality demonstrates either a ground-breaking achievement or a major failure in the making.

Perhaps it also demonstrates the type of pace and drive that's needed to make this sort of project a success.

With a holiday planned to Disney World next week with my family, I can't help see the similarities between Larry Page, Google's founder and Walt Disney.

Both are visionaries, pushed boundaries and want to change the built environment through technology.

Disney envisaged connected cities. Disney World was meant to be the first step of Project X, a massive project to create Walt's vision of a Utopian city in Florida. Walt's untimely death from lung cancer eventually halted that dream

Page definitely has similar traits, but with pace and global influence behind him, he may achieve what Walt Disney couldn't. In a few years we could live and work in connected smart spaces, all powered by Google of course!

Larry Page's dream of using technology to fix cities may come to Canada first.  Alphabet's Sidewalk Labs Eyes Toronto for Its Digital City The urban tech moonshot born at Google wants to reinvent cities `from the internet up' 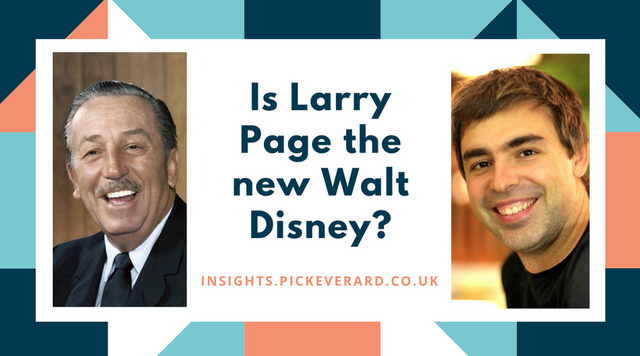 Projects like these show extraordinary potential for disruption in #construction #housing & #urbanplanning https://t.co/JaUi6bQLCH