Without too much media coverage outside London, the Mayor of London has published his Housing in London 2017 study. The study reviews capacity challenges, opportunities for innovation and, as you would expect, labour shortages and impacts of Brexit.

There is a whole report filled with the evidence, facts and figures which back the study (linked here) and it makes interesting reading.

But, one graph really stood out; the analysis of the labour market in London and their origins.

Only 55% of construction workers in London are from the UK, with 27% from the EU and the remainder from outside the EU. The mayor states that Hard Brexit, the withdrawal from free movement of people, will be crippling to house building in London, and you can clearly see the rationale behind that statement.

My opinions on Brexit are now mixed.

I was on the side of Remain, I campaigned in the street every weekend leading up to the election, dealt with abuse and intimidation from the other side, but now accept the result. And I can see the impact of Hard Brexit, if that does happen, being catastrophic in the short term in our industry.

The long term impact of this is harder to analyse. It may well be the wake up call needed to shock our schools and careers system into thinking construction is just for the naughty kids, and may be the catalyst to a major overhaul of the way we teach, train and retain skills in the UK.  Alternatively, we may see limited impact to the demographic mix of labour, but an impact on the consumer as levies and taxes and a shortage in capacity are passed on to house buyers and renters.

Ultimately it's for the industry as a whole to work together and adapt to the economic and labour climate the government is creating. A fascinating and challenging two years are ahead of us!

A "hard Brexit" could have a "crippling effect" on homebuilding in the capital, the mayor of London Sadiq Khan has warned. One in four construction workers in London is from the European Union (EU), a report by City Hall has found. 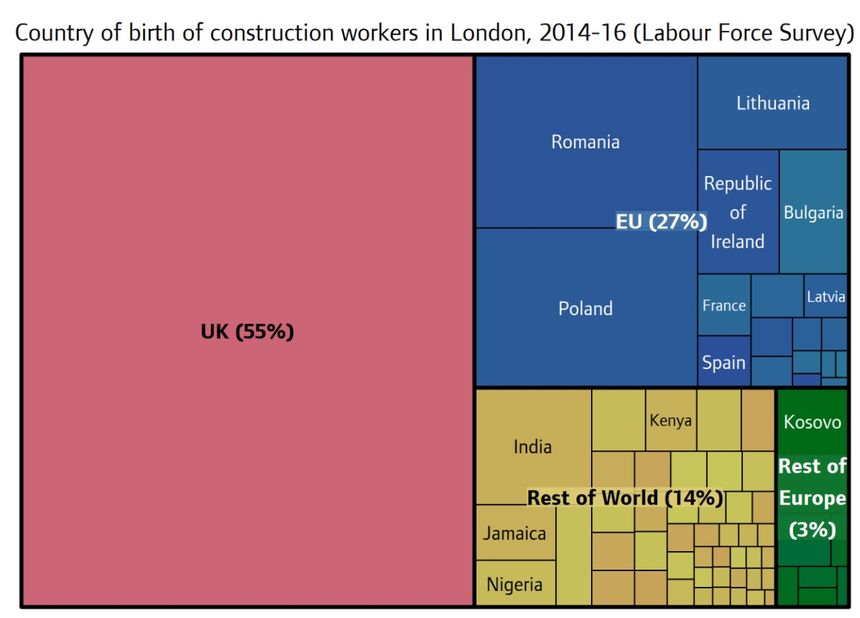 Why London has a housing problem, in one chart. From Housing in London 2017 https://t.co/7j2nFFNrk6 pic.twitter.com/NFYxuCQUE5

45% of construction workers in London are from overseas & 27% are from the EU. Fascinating data from @LDN_gov.https://t.co/HRb8S4kIWJ pic.twitter.com/Q37pKHaHSn